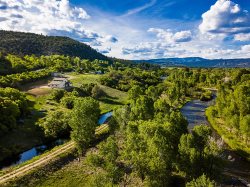 If these mountains could talk, they would tell stories of a rich and diversified past. An Old West town that has transitioned from a mining hub to a recreational mountain getaway. Ancestral Puebloans who made their homes in rock shelters, Ute Indians who then found shelter in their abandoned cities and scores of miners in search of silver and gold. Durangos storied past dates back to the ruins of 700AD, the railroads of the 1800s and Hollywood Classics of the 1960s. Step back in time as you explore the ancient ruins of Mesa Verde National Park, follow the paths of the miners on the Durango Railroad or take in the views at Bakers Bridge where Butch Cassidy and The Sundance Kid played. Today, these world-class attractions and the quaint historic Downtown reflect a rich heritage unique to Durango.

Evidence reveals that the Ancestral Puebloans were attracted to these mountains in 700AD when they made their homes in the ancient ruins of Mesa Verde, until mysteriously disappearing in the 1300s. Legend says that many of them lost their lives along the banks of the Animas The River of Lost Souls in Purgatory and their cries can still be heard today. The Ute Indians then found shelter in their abandoned dwellings until 1860 when gold was discovered in the San Juan Mountains. Miners, farmers and prospectors arrived in droves in search of their fortune, camping on the banks of the Animas.

Hills Alive with Silver and Gold

Drawn by the wealth of silver and gold, the Denver and Rio Grande Railroad was born to serve the mining industry and Durango was established in 1880 on the banks of the Animas River as the railhead for the new line. By July of 1882, the tracks to Silverton were completed. Originally constructed to haul silver and gold into the high country, the train soon became a favorite for passengers simply on board for the spectacular scenery of canyons and peaks. Durango continued to boom with over 2000 new residents and 134 new businesses being added in the first year. The hills were alive with silver and gold, the town prospered, Durangos finest Victorian building, the Strater Hotel was built, Hermosa House at Trimble Hot Springs was built and Durango soon became the gateway to the Southwest. Sadly, the unstable nature of the industry saw Durango going through many ups and downs.

From Mining Town to Mountain Getaway

The creation of the San Juan National Forest in 1905 and Mesa Verde National Park in 1906 boosted tourism and Durango relied less on the mining industry as it slowly became a world-class vacation destination. By 1910, the population had doubled, the market for silver and gold had declined and tourism boomed until the Great Depression. Durango was destined to succeed and the 1950s brought on another economic boom. Fort Lewis College opened its doors in Durango, Purgatory Ski Resort put Durango back on the map as a vacation destination and a tourism boom began. The railroad eventually abandoned its tracks from Antonito to Durango, however today The Durango & Silverton Narrow Guage Railroad is Durangos biggest attraction.

Durango is truly where the old west survived, and where the new west thrives.

Jump to a Rental