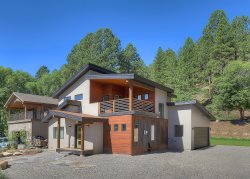 Discover an unsolved mystery at the Mesa Verde National Park, a unique National Park and World Heritage Site focused on preserving the Ancestral Puebloans cultural relics. Discovered in the 1800’s and declared a National Park by President Theodore Roosevelt in 1906, Mesa Verde was home to the Ancestral Puebloans for more than 700 years. It is here that they built their stone homes in the sheltered alcoves of the canyon walls until they mysteriously left and disappeared in the 1300’s.

Today, Mesa Verde preserves over 5000 known archeological sites including 600 amazing cliff dwellings and architectural masterpieces, all that remains of this ancient culture. The Ancestral Puebloan (Anasazi) cliff dwelling ruins and sites are found throughout the canyons and mesas of the park, perched on a high plateau south of Cortez and Mancos and offering a glimpse into the lives of those that called it home.

Selected the “No. 1 Historic Monument in The World” by Conde Nast Traveler and “One of The 50 Places of a Lifetime – The World’s Greatest Destinations” by National Geographic Traveler, Mesa Verde National Park is only 35 miles west of Durango. This makes Durango the ideal base for a visit to the park and Vacation Accommodations of Durango has the ideal Durango vacation rental to return to after a long day of exploring this beautiful World Heritage Site. If you want to be closer to the Park, check with us for availability of our vacation rental homes in Mancos and Hesperus, Colorado.

Jump to a Rental